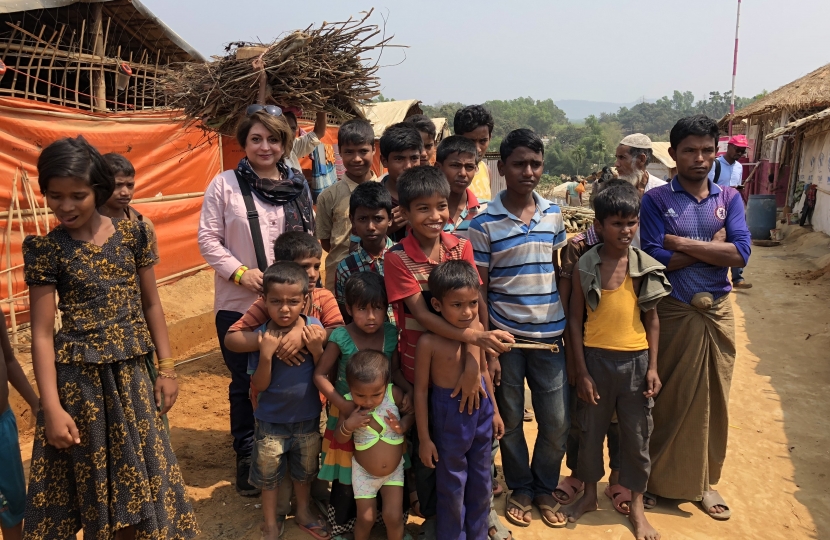 Time is running out for countries to make good on their pledges to help Rohingya refugees fleeing from Myanmar before the monsoon season arrives, a Conservative MEP warned today.

Speaking after visiting refugee camps in Bangladesh, Baroness Mobarik said it was not acceptable that 40 per cent of the initial $83 million promised by the international community to the UNHCR had still to be donated. Tomorrow the United Nations is expected to call for hundreds of millions of dollars more to be made available to deal with the humanitarian crisis.

Baroness Mobarik said: "Almost 1 million refugees are living in makeshift shelters built on steep sandy hills that are at risk of collapse when the monsoon rains arrive. The conditions are desperate now. If the shelters and temporary latrines get washed away the situation will become intolerable, contaminating drinking water and heightening risk of serious disease such as cholera.

"Bangladesh has stepped up to the plate and is doing its best. So are the aid agencies on the ground. But they cannot look after hundreds of thousands of refugees without help and it's unacceptable that some countries have acknowledged the disaster I saw unfolding, promised money but then do not followed up on their pledges.

"The refugees cannot wait. The monsoon is coming and before that danger of cyclones. They need help now."

Scotland MEP Baroness Mobarik travelled to several Rohingya refugee camps in Bangladesh the largest of which, Kutupalong, is now equivalent in population size to the country's fifth largest city. She met officials from UNICEF, the UNHCR, Oxfam and the Bangladeshi aid agency BRAC. She also held discussions with the British High Commissioner, representatives of the Bangladesh Government and the EU delegation to Bangladesh.

Baroness Mobarik added: "Of course the goal has to be a political solution that allows the Rohingya to return to their homes in Myanmar with guarantees over their safety and long term security. But that must not distract the world from addressing the very serious immediate problems the refugees face."